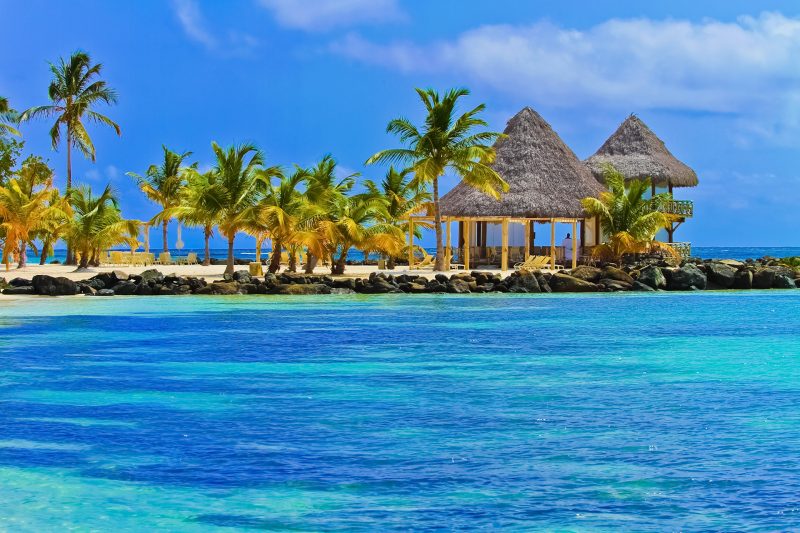 The natural surroundings in the Dominican Republic are characterized by the “Pico Duarte”, a mountain which is 3,175 meters high, the highest in the Caribbean. The country also has an extensive National Park called “Jaragua” with large colonies of flamingoes. The park is further famous for its caves with wallpaintings. The Dominican Republic is also renowned for its magnificent wide stretches of sandy beaches, music and dance. Numerous tourists are drawn to this country each year.
The Dominican Republic is a dream destination for many. This Caribbean country is primarily known as a beach destination and rightly so. It has beautiful long stretched white sand beaches and a clear blue sea. But the Dominican Republic has a lot more to offer. Just think about the fabulous waterfalls, the overwhelming nature parks and historical cities which can all be found in this country.

Isla Saona
On Isla Saona, you imagine yourself in a paradise. The beach is stunningly white and the sea water is so clear that it all seems like a large swimming pool. The island is located south-east of the Dominican Republic and forms part of the National Park Del Este which is excellent for snorkeling, diving and bird-watching. There are regular excursions to Isla Saona from Punta Cana. If you are not staying in Punta Cana, but for example in Samaná or Puerto Plata, you can visit Bacardi Island (Cayo Levantado) and Paradise Island at Punta Rucia. Both islands are equally paradise-like but are somewhat smaller than Isla Saona.